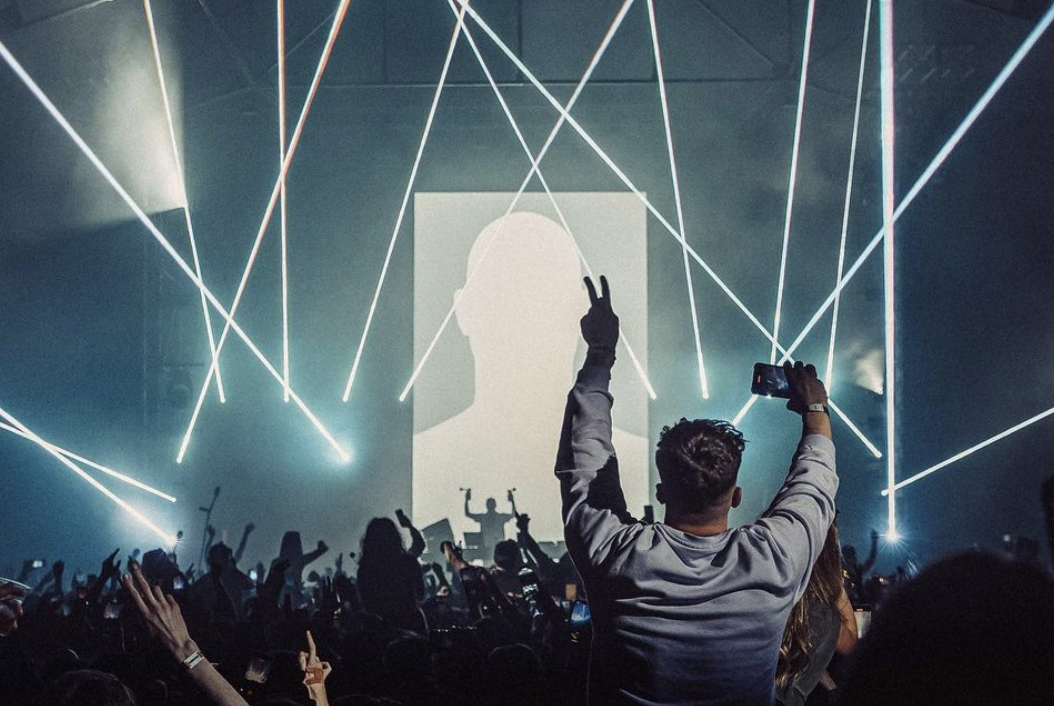 As preliminary data is released and restrictions ease across the UK, I wanted to look back on one of the most significant live-music events in recent history. A playlist of our favourite tracks from the event can be found below.

6,000 ravers from the Liverpool City Region were given the all-clear to attend the biggest UK event since the pandemic hit. The legendary Liverpool-based events company, CIRCUS – owned by well-renowned DJ and producer Yousef – hosted ‘The First Dance’ as part of the national Events Research Programme (ERP). Over the course of two nights, ravers took over the iconic Bramley Moore Dock warehouse. No masks, no social distancing – just belting techno, dazzling visual displays, a packed warehouse, and an unmissable line-up.

“With 3 weeks notice we got the approval to move forward. Making it happen from that point to this has been EASILY the most complicated work experience of my or my team’s professional career.” – Yousef

In order to gain access to the event, attendees required a negative coronavirus test result from one of four lateral-flow testing centres throughout Liverpool. Tests were taken the day before each event and the process was incredibly smooth, many were in and out within 5 minutes and received their results an hour later.

As we edged closer to the entrance it all felt so surreal knowing the wait was finally over. Once in the venue, the energy in the room hit us and it was infectious. It felt like joining a crowd of people that we had known for years.

One remix by Yousef perfectly captured the feeling of the crowd: the 1998 classic ‘Free’, by Ultra Naté. Yousef began with a poignant intro, he played his own track ‘When We Were Free’ to ask “When will we be free again?”, only to reply with Martin Luther King, Jr. exclaiming “Free at last!”. As he kicked off his set with the classic track, the crowd went wild.

“That moment was the greatest in my DJing career, that exact moment – it was incredible.” – Yousef

There was undoubtedly a mutual feeling of gratitude amongst ravers, artists, and promoters alike. Everyone felt blessed to be part of something so significant, all eyes were on us, not just nationally but globally.

The Blessed Madonna, armed with a brand-new track: Marea (We’ve Lost Dancing), pulled at heart-strings as people listened in all across the globe. The track paid tribute to closed nightclubs and venues around the world. It featured her saying “This year we’ve had to lose our space, we’ve lost dancing. We’ve lost – everything we took for granted”.

“If I can live through this, what comes next… will be… marvellous.” – The Blessed Madonna

Sven Väth came back big, once again mixing his entire set on vinyl. A couple of my favourite tracks are his self-produced ‘Dein Sheweiss’ and BDB’s ‘Boss Rhythm’ – an energy-packed track that I cannot stop playing.

Hot Since 82 ensured his return to the decks was one to remember. His viral intro included a sample of UK Prime Minister Boris Johnson first announcing lockdown restrictions. The sample was followed by Moodymann replying “Fuck that shit” and Dusky’s remix of ‘Modern Romance’ by Catz n’ Dogz – an undeniable banger. A couple of my tracklist favourites were Nick Curly & Jansons remix of ‘Naboo’ as well as ‘Medicine’ by Dope Earth Alien & Jansons.

Next up was Yousef going B2B with a special guest, the secrecy kept us all guessing for days. The guest was none other than Solardo and their set was glorious. Although only half of the duo was present, the crowd was still blessed with banger after banger. Without a doubt, my favourite songs of the set were Chus & Ceballos’ Iberican remix of ‘Sweet Love’ and ‘This One’ by Marco Lys & Mendo.

After an incredible performance, Solardo exits and the lights dim. Yousef picks up the mic and introduces yet another B2B, this time with triple platinum selling artists, Camelphat. Despite being completely unplanned, this set was by far one of my favourites. Their dynamic on stage was unmatched, they mixed big hit into big hit: ‘Cola’, ‘Panic Room’, ‘Be Someone’. Atmospheric deep house seamlessly transitioned into hard-hitting techno – I couldn’t help but be lost in the moment.

“Incredible energy. Simply amazing to see so many happy people together once again, finally!” – Camelphat

After setting the bar so high, CIRCUS knew they needed to go out with a bang. Their closing act was none other than the legendary Fatboy Slim. In the game since 1981, Fatboy Slim is a global phenomenon, frequently headlining some of the biggest shows across the globe. His set was nothing but pure energy and nostalgia. He opened with Saffron Stones’ ‘The Music’, with his chart-topping hits following soon after – ‘DFCW’ by Sosa UK was another banging feature.

“Such a joyful night. Best government pilot scheme I’ve ever been involved in.” – Fatboy Slim

In summary, ‘The First Dance’ exceeded all my expectations. It was truly an experience I will never forget and I cannot wait for the entire country to return to raving. Special thanks to the entire CIRCUS team as well as the all the artists, civil servants, and scientists that made it all happen.

Preliminary results have suggested big events without masks and social distancing (that utilise screening and improved ventilation) are as safe as going to a shopping centre or eating in a restaurant. The future is looking bright. From everyone at the Tribal team, we will dance again.